CHAPTER THREE - BELONG TO ME

Come with him? Anarion's mind repeated. He was unable to comprehend the words at first. They were words he had never expected to hear.

"Would you like that? To live in space? On The Abyss?" Abaddon asked."With me?"

“With you?” Anarion parroted. While the first offers were incredible, this last one was unbelievable.

A warm smile lit up his Kin’s beautiful face. “Yes, Anarion. With me.”

Anarion felt like a door had suddenly been cracked open that he hadn’t known was there. For a moment, he could see Kin flagship, the Abyss, in his mind. It looked like a hilt of a sword; a giant floating monster of a city in space. Its skin was black as a raven’s wing and its polarized view ports and thrusters glowed indigo.

Live there? Live in space? With him? Anarion found himself touching the Kin commander’s chest as if to check to see if he was real. I should hate him, shouldn’t I? Dad would want me to. But I -- I don’t. I never could.

He stared into those jade green eyes and started to smile. A lightness filled his chest. He was going to go live in space with Lord Abaddon. He’d get to see that beautiful face every single day and bask in that comforting presence. So different from his father’s frenetic energy. Tranis loved his war more than his son anyways. Anarion had just gotten in his way. Like a flower deprived of water and sunlight, Anarion found himself unfurling towards the being that his father would have liked to eradicate.

“GET AWAY FROM HIM!” Mercy’s voice rang out, hurting Anarion’s ears.

She grasped Anarion’s slender shoulders and wrenched him away from Abaddon.

“Don’t you dare! Don’t you dare try to take my son!” Mercy yelled. Her voice was like the buzzing of a loud, angry insect in his ear.

Abaddon stood up. His imposing, muscular six-four inch frame dwarfed the human woman. “Will you let your emotions rule your better judgment again?”

“What are you talking about?” she snapped.

“You followed your husband into this insane war. Dragged your child into harm’s way. And now you would let fear of me, of us, allow your son to be condemned to a life of horrors in the Starn,” Abaddon said, making a cutting motion in the air.

“You have no right to speak of such things,” she hissed. “After what you’ve done … you’re a monster. A bloodsucker! A vampire! You’re the thing that hides under children’s beds or in their closets to drag them away from the light and the ones who love them!”

Anarion’s gaze swiveled between Mercy and Abaddon. His mother’s vitriol wasn’t unsurprising, but her fear was. She’d only ever seemed disgusted and dismissive of the Kin, but now, while those emotions were in ascendence, so was a crawling terror that caused her lips to writhe back from her teeth animal-like.

“All right, Anarion. I’m so glad. So very glad you’ve made this decision,” Abaddon answered.

All the blood drained from Mercy’s face even as tension seemed to leave Abaddon’s body. He had won and he knew it. He struggled to free himself from Mercy’s grip, but she wasn’t letting go. Instead, she wrapped her arms around him and held him tighter. He’d have to hurt her to extricate himself. The scent of her washed over him. The iron tang was back with a vengeance.

“You bastard!” she shrieked. “You sick son of a bitch!”

Abaddon’s expression darkened. “I’m not taking Anarion away to hurt him.”

She laughed shrilly. “Death would be better for him than to go with you! You’re sick! Sick! Wanting to drink blood from a child!” She shook. “Your perversions are well known! You won’t get your chance wth Anarion --”

“You think I would feed from a child?” Abaddon gave out a shrill laugh. His cultured voice became edged with anger. “You fool! I would never harm him! Never!”

Why? Anarion almost asked. But he didn’t care about the answer at that moment, because he knew that it was true. Lord Abaddon would never hurt him.

“Your husband administered the treatment to Anarion, didn’t he?” Abaddon pushed, almost gently.

“What's the treatment? What does he mean, Mom? Did Dad do something?” Anarion tried to turn in his mother’s arms to face her, but she clutched him, holding him in place.

Mercy’s voice shook as she said, "I don't know what you're suggesting. My husband --”

“Was the head of the trials. Was once our greatest ally. Until …” Abaddon broke off. His gaze found Anarion and he extended one hand. “Until everything went wrong. Well, perhaps almost everything.”

Mercy pulled Anarion back even as the boy yearned to move into that touch. The Teklan suit had retreated and Abaddon’s bare skin was exposed. It was an elegant hand with long fingers. He hadn’t noticed how lovely even his Kin’s hands were.

“Until all those children died! Then he found out what you were really up to! The trials weren’t about exterminating human diseases! They were to --”

“You don’t know what they were about!” Abaddon yelled for the first time. His eyes flared. “Your husband has lied to you, Mrs. Gray. He probably did it out of guilt. Especially if …” Again, that searching look was back as Abaddon stared at Anarion’s face. “I thought the trials were a failure, worse than that, but they weren’t. Not altogether. How frightened Tranis must be that I would discover this.”

“You’ve discovered nothing! Nothing, you hear me!” Mercy’s voice was so loud it shattered the air.

And that was when Anarion knew that she was hiding something. He had noticed that she got very loud whenever he realized something she didn’t want him to know. He twisted around to look at her. The smell of iron rolled over him again. Another gush of saliva filled his mouth and a wave of sickness spread through him. He had to shut his eyes for a moment to keep the nausea at bay.

“Your child was sick, wasn’t he? Very ill. Everyone felt so badly for you both. Part of your husband’s zeal in the trials was to find a cure for his son. I believed that made him perfect for the job,” Abaddon murmured.

Anarion blinked. Sick? He didn’t remember being sick. But then again, things were a little blurry for him. The past was like an opaque wall of glass where he could only see shadows moving behind it. "Mom? Was I sick?"

"Just -- just a little. But you got better! Your father made you better!" Mercy said, her dark eyes darting down to him.

“The trial treatment. The gene therapy. The drugs. They made Anarion better, didn’t they?” Abaddon’s voice was low and soft. “Little one, have you noticed anything … different about yourself? Than the other children? I’m not asking because I think it’s bad. I just want to know.”

Anarion slowly nodded. “I -- I can see in the dark really well and -- and the light sometimes hurts me. Makes me dizzy and stuff.”

“That’s nothing to be ashamed of, Anarion. The light doesn’t agree with me either.” He cocked his head to one side. “But I bet there are other good different things about you. Are you fast?”

“He’s not a normal human boy,” Abaddon stressed the word ‘human.’ “And you are lucky that things have not … escalated.”

Anarion’s brow furrowed. “What do you mean, Lord Abaddon? What does escalated mean?”

But Mercy was having none of this conversation so she interrupted, "What have you been filling his head with, Abaddon? This is nonsense! This is insane!”

Abaddon gave her a stern look. “You are the one who has acted insanely. You have kept this boy away from us when we could have helped him. You’re lucky that nothing bad has happened. For it could. It is not safe for you to have Anarion!”

"Not on purpose," Abaddon answered quietly. His gaze flickered to Anarion and he gave the boy a gentle look as if to take the sting out of his words.

Anarion paled then. Why did Lord Abaddon think he would hurt his mother?

Mercy wrapped her arms tighter around Anarion's shoulders. The back of his head was pressed against her small breasts. Another waft of iron scented air invaded his nostrils and his stomach growled then clenched.

"Anarion," Abaddon said, offering one hand out to the boy. It looked so pale like a white starfish compared to the rest of his black clad body. "Come to me, little one. You need to come to me if you don’t wish to hurt anyone."

"Forgive me for saying this, but your mother is leaving me no choice. You need to come with me, Anarion," Abaddon said as he went down on his haunches again so that they were almost eye to eye. "But if you stay with her you'll be trapped in the Starn. In that filth. Not in the clean darkness of space. That's where you want to be, don't you? With me? In space?"

His emerald eyes glowed, pulsing with a hidden fire. Anarion nodded. Yes, he wanted to go. Oh, yes. Absolutely yes. If he allowed his mother to take him away from Lord Abaddon now, his life would be destroyed. He’d live in the Starn and more than his blood would be taken. He’d never see Lord Abaddon again. He’d never see the interior of the Abyss. Instead of the sweet blackness of space, he would live and die in the dirty darkness of the Starn. And maybe he, before his life was over, he might hurt someone ...

“Mom! Let me go! I want to be with Lord Abaddon!” he cried out and wrenched himself from her arms.

Abaddon extended both hands towards him as if to take him back into an embrace. “Come to me, Anarion. You belong with me.”

She lunged for Anarion and caught the sleeve of his coat. Her long fingernails ripped through the thin fabric of his jacket and scored his flesh. Blood welled up in the shallow scratches. Anarion froze. His eyes stared at the red beads. They glistened. They let out a sweet, minerally scent. He leaned down and licked one of them. The crimson, life-filled flavor burst on his tongue. His body thrummed with it. He licked some more. He sucked at one of the long wounds in his flesh. But that wasn’t enough. The little amount of fluid hardly touched his overwhelming thirst.

"No, Anarion, no," Abaddon's voice sounded hardly above a whisper as there was this rushing in his ears.

They were the sounds of his mother's blood moving through her veins and her heart beating. They were mesmerizing sounds. He cocked his head to the side and slowly spun around to face her.

"Baby?" Mercy asked. "Are you all right? I didn't mean to scratch you."

Anarion smiled at her though he didn't feel happy really. His stomach growled again. It ached. It was so empty. It needed to be filled. His mouth was parched. He needed something to drink. He took a step towards her.

But she only managed a few stumbling steps backwards. That made Anarion angry. She thought she could get away from him? She was a soft, fragile, slow thing. He could catch her in a heartbeat. Then the scent, that glorious iron scent flowed over to him from her again and all thought was lost.

But Anarion leaped for her. 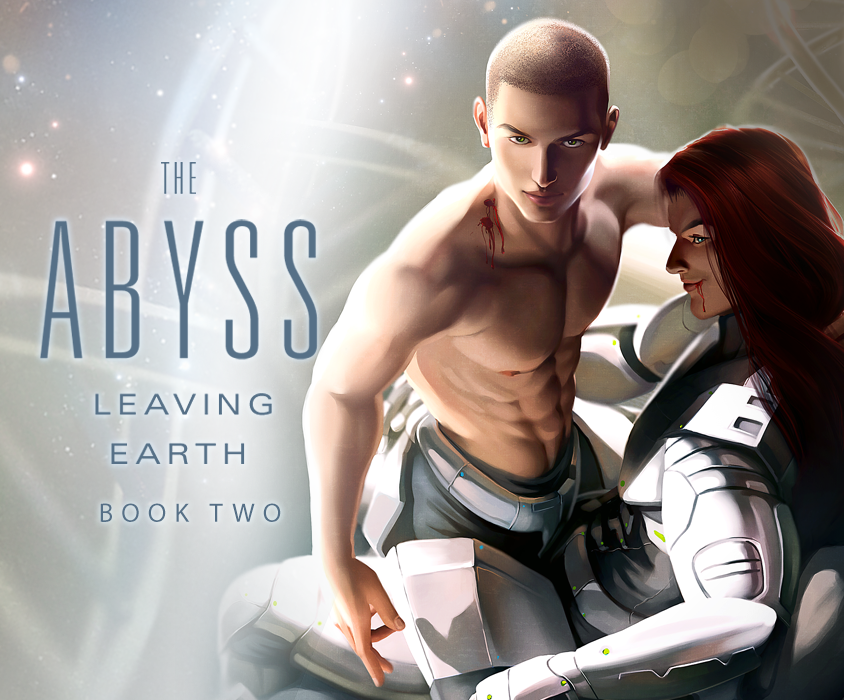